SCROLL TO FIND OUT MORE
ChargeAds
™
Get in touch

TAP ANYWHERE TO START
Wh
why boost:
Boost running shoes have been acclaimed as the greatest running shoe adidas has ever made. Innovative adidas Boost cushioning technology is made from highly elastic thermoplastic polyurethane (TPU), which has been formed into elliptical shaped pellets.

TAP ANYWHERE TO START
miracles on demand:
Boost technology was initially introduced as performance footwear for runners. The original adidas Energy Boost was released in 2013, the Pure Boost in 2014 and the Ultra Boost in 2015.
Ne

TAP ANYWHERE TO START
At the end of 2015, the NMD_R1 was released as lifestyle trainers with a streamlined, modern silhouette and knit upper that works both for the gym and daily wear.

TAP ANYWHERE TO START
roo
Since then, Boost technology has been integrated into an extensive range of adidas athletic shoes.

TAP ANYWHERE TO START
roo
All athletes need energy return and comfort, so the original, iconic silhouette has evolved to encompass a larger range of models, materials and colours.

DELETE SCENE
A
new
age
for
mobile
story
te
lling
.
A decade-old media powerhouse with a creative-first process
Chargeads allows brands to cut through the clutter and communicate to audiences that are increasingly immune to traditional advertising formats.

Recycle Unwanted Clothing
FIND OUT HOW

Sponsored Content
How 5G Will Fundamentally Change Everything You Know About Mobile Computing
Samsung
Landing
Experience
Use Brand Stories as destination page or content hub as part of a wider campaign
Find out more
Brand Collections
Amplify collections of Brand Stories, distributed over native units that blend in with their surrounding content.
Find out more
In-feed
Programmatic
Distribute your content programmatically across the Chargeads partner network. The unit serve into standard inventory and automatically resize to the full height and width of the device.
Find out more
Leverage an outstanding distribution network to amplify your content

Who we work with:
Brands and
Marketers
Publisher
Sales Teams
Agencies and
Tech Platforms
Government
and Education
1
Transform your storytelling with a radical content format used daily by over 1 billion people across the world.
2
Adopt a more efficient content creation workflow that serves all stakeholders in the organization.
3
Create stand-alone visual properties hosted by your domain or distribute stories programmatically across any major DSP.
1
Create a highly differentiated commercial product with a world-class appeal
2
Transform your branded content offering with a visual-first product that speaks to a new generation of consumers.
3
Use existing ad-server real estate to amplify brand-stories anywhere within your content.
1
Create a visual-first branded content product that’s unique to your business model.
2
Collaborate seamlessly between creative, media and account management teams.
3
Leverage your partnerships and programmatic infrastructure to amplify Brand Stories at scale.
1
Create a new type of visual experience that captures the attention of the social-media generation.
2
Leverage existing visual assets or tap into over 3 billion photos and videos of Getty Images.
3
Amplify your content seamlessly over social, native or programmatic media.
Trusted by 100+ global brands

Introducing Chargeads:
Connecting brands with the mobile-first generation.
FIND OUT MORE
Over 1 Billion people are using the Story format every day across the web or social apps
Source: Forrester Research, June 2020
Chargeads allows brands to cut through the clutter and communicate to audiences that are increasingly immune to traditional advertising formats.
Helping create a more intimate and immersive experience for your users
Bring an unprecedented level of creative control to your content with a format purposely engineered for the visual age.
Brand Stories:
Entertain
Reward
Inspire
Educate
Inform
Support
Amplify your content in-feed via Programmatic Display
Distribute your content programmatically with our unrivalled media capabilities and local expertise.

Distribute via Social or Native Sponsorships
Once published, Brand Stories are available via stand-alone URLs that you can share on Social or as landing page for your campaigns.
All the creative possibilities you've come to expect: 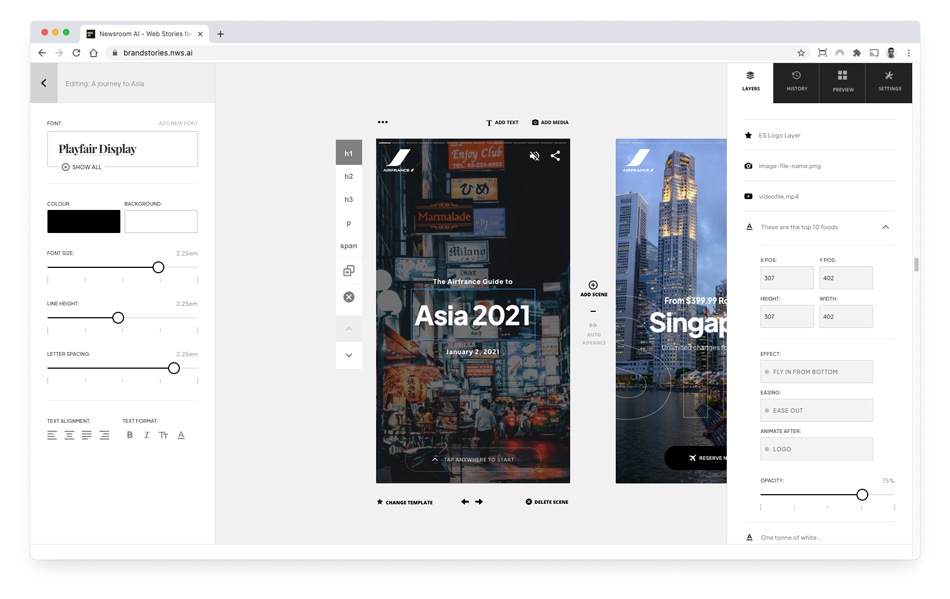 We accommodate design, production and media teams, all with a single point of contact. Reporting is available for in-depth analytics over every user interaction:
Oops, this mode is not supported! Please hold your phone upright.

The number of times a story has been loaded, whether in or out of view.

Total sum of all scene views, including views resulting from auto-advance.

The average time spent on individual scenes. Every time a user changes a scene, we send a time e.g. 5 seconds, and it's the average of those. Auto-advance implies a maximum for this value. The timer is capped at 20 seconds, to prevent skewing the average when the page is left open, and there is no auto-advance.

The number of CTA taps that open a URL, call a phone number or open an email client.

The total number of Attachments that were opened in a story.  Attachments are tracked separately to CTA actions, despite the buttons often looking similar.

How far (number of scenes) is reached into a story on average. This is calculated as: [(scene impressions / story impressions) / number of scenes] * 100.In the case of auto advance, it may not be due to user interaction.

Calculated as number of interactions / number of story views and shown as a percentage.
Trusted by 200+ global brands:

Get in touch:
Request a demo
Let's talk:
Thank you! Your submission has been received!
Oops! Something went wrong while submitting the form.
About us:
Find us:
64-66 Dionisie Lupu Street, Bucharest, Romania.